According to Countryaah data, Kuwait’s population was estimated at 4.1 million in 2019. More than half of the population is immigrant, most of whom are Arabs. However, the proportion of non-Arab guest workers from Asia has increased significantly since the mid-1970s.

In Kuwait there are also close to half a million Indians. Furthermore, there are large groups of Egyptians, Pakistanis, Bangladeshi, Iranians, Afghans and Filipinos. Most Palestinians have been forced to leave the country because of their support for Iraq during Iraq’s invasion of Kuwait in 1991; today only a few thousand remain.

During the period 1985-89, the annual population increase was 4.8 percent, and during the Iraq invasion of 1990, the country had 2.1 million residents. Of these, about 30 percent were estimated to be Kuwaiti citizens. During the invasion, many fled, and it is estimated that the population was down to about 700,000. 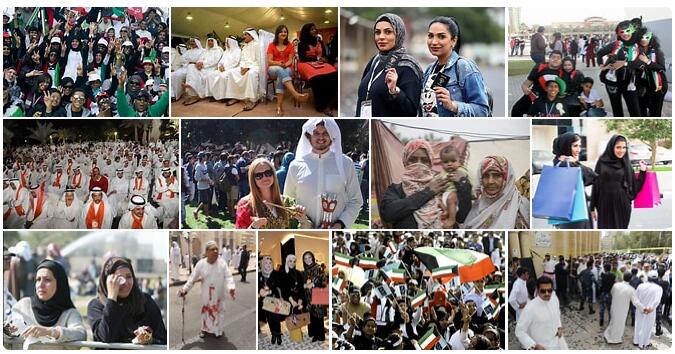 According to thesciencetutor, the official language is Arabic in Kuwait. The spoken language is of the badaw type and belongs to the yellow dialects, which form a branch of the Anaza group, the dominant dialect group in the northern Arabian peninsula. The spoken language has also been influenced by the numerous guest workers from other Arab countries. English is widely used and widely used as a lingua franca in contacts between Kuwaiti and guest workers.

The vast majority of the indigenous population are Muslims. Like the ruling family dynasty (Al Sabah), most Sunnis belong to the Malikite law school. About 30% are Shia Muslims.

With guest workers included, the number of Christians amounts to at least 10% of the population, perhaps significantly more. The largest single group of Christians is Roman Catholics. A relatively large proportion of Asian guest workers are otherwise Protestants. In recent years, several churches have been built in Kuwait.

The relationship between the leading Sunni majority and some Shiite groups has at times been tense. Among Shiite groups, there is criticism of the regime, which is accused of discriminating against them. Particularly during the 1980s, contradictions were reported as a result of the revolution in Iran in 1979 and the subsequent war between Iran and Iraq. Tensions rose after the US-British invasion of Iraq in 2003 and the subsequent Shiite dominance of Iraq. The riots in Bahrain during the Arab Spring have also affected Kuwait.